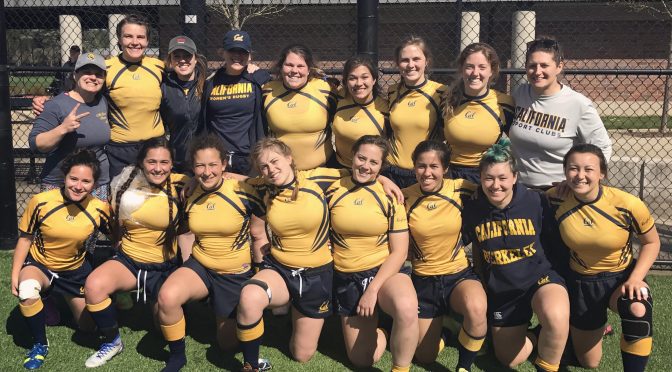 The 2017 spring 15’s season posed challenge, growth, and numerous learning opportunities that revealed CWR’s physical and mental resilience. With the addition of Humboldt State to our league, Cal faced off against Chico State, UC Davis, Humboldt State, and Stanford University for a total of eight matches. After falling to Humboldt the first game of the season, we defeated them on their home pitch in Arcata 45-32 after a grueling double-header the previous weekend. Other highlights of the season include practices led by guest coaches Vix Folayan and Kris Thomas, two skilled and knowledgeable USA Eagles who helped us prepare for and get excited about 7’s. Towards the end of our season, our spring rookies contributed almost immediately, and our fall rookies remained a force to be reckoned with throughout the spring season. Due to injuries sustained by key players, our spring rookies stepped up to fill big shoes; they started in league games and playoffs after just weeks of learning the sport. We look forward to their growth, the team’s progress, and what lies ahead for us in the 2018 15’s season.

After our regular season and playoffs, we made a quick transition to 7’s to compete in the Oregon 7’s National Qualifier. The qualifier hosted eight teams, including tough competitors  Central Washington University, Chico State, Oregon State, University of Oregon, University of Washington, and others. We eventually fell to Central Washington in the final, coming second in the tournament and narrowly missing our chance at a national bid. Although Nationals did not offer any at large bids this year, we’re aimed at winning a qualifier next year to advance and compete at 7’s Nationals.

Off the pitch, we worked to establish Cal Women’s Rugby as a team and presence in the rugby world. Because we are a club sport, generous donors and Cal Club Sports cover only part of our funds, so we come up with the difference on our own. This year, we exceeded our fundraising goal by working long hours at football games, helping out the basketball team, and making big moves throughout the Big Give. Thank you again to all of our amazing donors! Aside from fundraising, we also hosted our second annual prospect event to introduce high school players to academics, dorm life, and collegiate rugby.

Although we progressed immensely throughout the season, we will greatly miss all of our seniors both on and off the pitch. This year, we say goodbye to seniors Abby, Bre H, Brigi, Bri (Bean), Brooke, Ceara (8foot), and Kat, seven talented and powerful women whom we could not have done without. After graduation, Abby’s headed off to Ireland and Israel to play rugby, and Ceara will join the PMRC All Star team to compete internationally. Brigi’s immediate plans include travel and an archaeological dig; Brooke plans to go to Southeast Asia this summer then work for Skansa in Portland, and Bre H will play with puppies at shelters all while utilizing her humor to land her a cool job. Bri plans to play for the San Diego Surfers, and Kat for the Berkeley All Blues. The returning players will continue to train throughout the summer and fall to make our graduating seniors and supporters proud in the 2018 spring season.