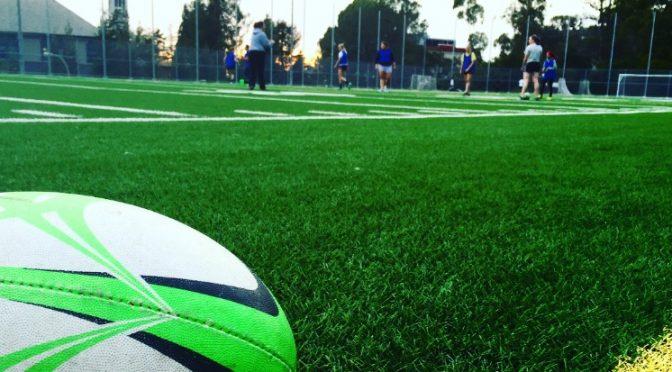 Any student at Berkeley will tell you they know about working hard, but here, as the sun sets on the turf at Maxwell Field, a new Cal Women’s Rugby team is setting out to engage in the kind of hard work few women will ever attempt. Laced into their boots, beneath their mouth guards, underneath their occasional bumps and bruises is the hunger for the game that is rugby and the tenacity to jump head first into a demanding and challenging sport. As coaches Mari Triplett and Sarah Davis put it to the newest members of the team as the year began, “Welcome to rugby, you have just made the best decision of your life.”

Their words ring true for the astonishing twenty-seven returning team veterans, many of whom were rookies only one year ago. Seeing them on the field, it becomes clear why nearly 100% of the veterans from the previous year are back for more: they are having fun. Don’t let the smiles fool you, though. These women are ready for a challenging season, and they don’t let any of their fellow teammates forget it as they hit the gym for weight-lifting under the guidance of strength coach Heather Lockwood, line up for sprints, or encourage each other to meet up for core work before practice. They know that growing in the game starts now, not months from now in the spring.

The players aren’t the only things that have grown as the year has kicked off. The team has gained over thirty new rookies within these past few weeks, more than doubling the size of the existing team. These women continue to surprise and impress with their ability to pick up the skills and strategies of rugby. Their enthusiasm, heart, and intensity in practice and, as we saw on the weekend of September 25th in their match versus Chico State, in the game has the entire team anticipating a fantastic year of women’s rugby at Cal and a powerful presence as a team in the future. Keep an eye on our website for more information about upcoming matches, fundraisers, player spotlights, gear, and more as the year continues to bring what is sure to be some great rugby. Go Bears!