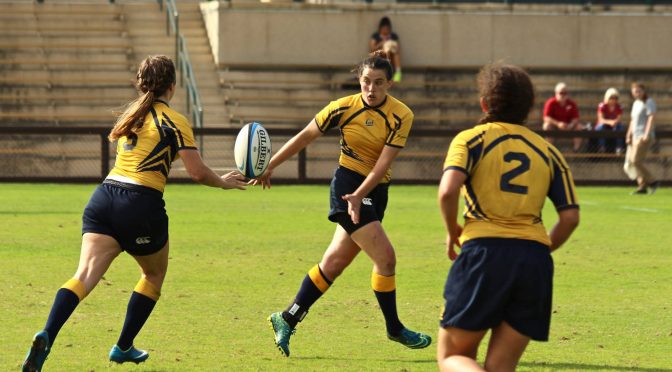 Cal, Stanford, UC Davis, Chico, and Oregon State all participated in the Stanford 7’s National Qualifier on Sunday, November 6, 2016 at Stanford. UC Davis ended up with the final victory in this tournament, but Cal fought with intensity in these matches, just barely dropping 3 of the games.

With a fresh roster, mixed of both rookies and veterans who are newly training together this fall semester, the Cal team worked hard and showed serious rugby skills and plays that demonstrated an exceptional fight.

Against Stanford, Cal merely trailed the Trees by only 7 points. The Cal defense put up a determined battle against their rivals, especially when tracking break-aways, and keeping the Trees out of the try zone, in which other teams in the pool struggled to do. Cal’s veteran full-back Claire Quinata made excellent track tackles to help spare the Bears from being scored on at crucial times, despite the outcome of this game being a Stanford win, 17-10. Cal went up against UC Davis next in their 2nd match, and put up a solid resistance yet again, only losing the game by a 5 point try (17-12). Veteran Cathy Cai made some relentless hits on the Aggies’ attackers. First year rookie Izzy Roberson, made huge hits as well, and used her footwork, speed, and agility against the defense, breaking through to score a beautiful try. Then Chico State had a dominating score (29-5) as Cal continued to not give up and to stay alive for the finishing matches. Finally, Cal finished the tournament with an unlucky loss against Oregon State (12-10). Cal nearly beat the Beavers in the final minute, pushing right on the try zone line as the game whistle blew. 7’s is always up for grabs by any team at any minute in the game, and while Cal had the skill set, the team couldn’t quite get away with enough points this weekend. Every match was unpredictable, and had the audience on edge, making it exciting with every single play.

Head Coach Mari Triplett has been building up and strengthening the Cal roster of rookies and veterans, with each and every week striving to achieve synchronization. And with the absence, due to injury, of one of our major veterans Ceara Lafferty, the team adapted as well as they could by making shifts on offense and defense quickly. And yet, this group of players brought a fierce performance, and each game was a reflective learning experience for the Bears.

Fall competitions such as this Qualifier, are amplifying this Cal team, especially for the upcoming competitive Spring 15’s season. So stay tuned, as Cal jumps right into 15’s now to get ready for Scrum by the Sea at UCSD on November 12th -13th. Big Scrum Bears!
-Bri Riley (PR)